A Viewer’s Guide to RobiHachi: Episode 10 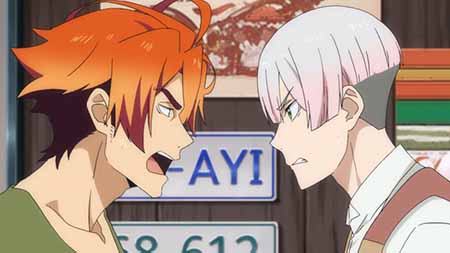 ***SPOILER ALERT***
This episode guide may include plot and/or character reveals.

English Title: Never Get Involved in a Buddies’ Quarrel

Summary: As the Nagaya Voyager approaches the Isekander Checkpoint, Hatchi finds a notice that debtors, meaning Robby, will not be allowed through customs. Robby and Hatchi start arguing about whose fault it is they cannot continue their journey. Ikku notes the dispute is probably due to the stress of being together on such a long journey. The argument shifts to complaining about each other’s living habits and ends up with Robby and Hatchi marking off their territories with spray paint.

Yang is confident Robby will be arrested at the checkpoint, so he makes a side trip to the planet of Pinopendio. Yang, Allo, and Gras enjoy a leisurely day of sightseeing and fine dining before continuing to the Isekander Checkpoint.

Back on the spaceship, the border battle continues. Hatchi installs an intrusion alarm and Robby builds a cardboard wall. After a long day of antagonizing each other, each man sits brooding on his side, remembering happier times. A sudden jolt causes a lit candle to fall against the cardboard wall, which before long is burning wildly. Ikku goes into fireman mode, dousing both the flames and any remaining antagonism between the two friends. The conflict resolved, Ikku composes a poem to commemorate the episode.

Later, Hatchi sits on his bed, viewing Robby’s debt on his Smartbracelet. He sighs, clicks the payment button, and returns to the ship’s bridge. Despite Ikku’s protest, Robby submits their passport codes at the checkpoint. To everyone’s surprise, except for a smiling Hatchi, the officials send them through.

Aboard the Lunar Guard ship, a voice announces the latest Smartbracelet payment confirms its user is en route for Isekander.

See “Getting Started” for background information on the anime, which is based on an Edo Period fiction series called Tōkaidōchū Hizakurige.

This is the only episode where Robby, Hatchi, and Ikku do not leave from or arrive at a planet; it takes place almost entirely inside the Nagaya Voyager. 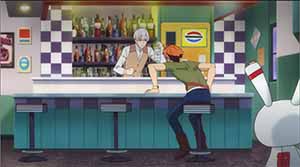 Apart from glimpses of a woman in Robby’s daydream and the Lunar Guard Captain, the episode does not feature any guest stars. 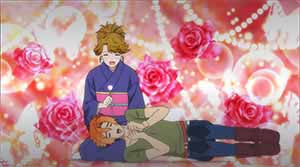 The woman cleans Robby’s ears with a tiny bamboo scoop called mimikaki. This social grooming is a sign they are a romantic couple. 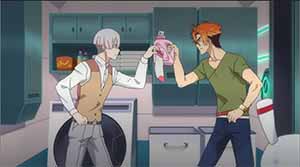 The planet Pinopendio is a parody of Matsusaka, a post-station on the Isekaidō Road. Matsusaka translates to “pine slope” in English. In Italian, pino means “pine” and pendio means “slope.”

Matsusaka is famous for producing premium quality beef and cotton fabric. The sukiyaki enjoyed by Yang, Allo, and Gras, is a hotpot dish that features vegetables and thin slices of beef cooked in a soy-based broth.

The Pinopendio Cotton Weaving Center is a parody of the Matsusaka Cotton Center.

The Ossu! Yasujiro Seishunkan Museum parodies the Ozu Yasujirō Seishunkan Museum located in Matsusaka. The film director Yasujirō Ozu was known for portraying family relationship dynamics. Ossu! is an informal greeting used by men that means something like “Hey!” or “What’s up?!” 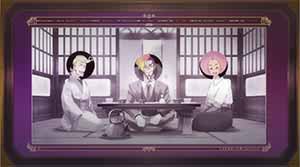 The photo board recreates a classic Ozu “tatami shot” of a family gathering. The camera is positioned two or three feet from the tatami floor, hence the name of this low-angle perspective. The foreground features a metal teakettle, a signature Ozu prop.

The online shopping site Nametake.com, pronounced “nah -meh-tah-keh”, is an obvious parody of Amazon.com. Nametake is a condiment made from mushrooms cooked in soy sauce, rice wine, sugar, and vinegar. 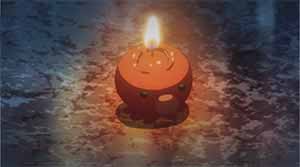 The octopus candle was a gift from the Mars Tourist Bureau Chief who appeared in episode 2. 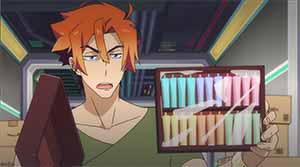 The stick candles Robby complains about are handmade from plant-based wax. 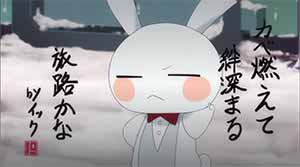 Ikku composes a haikai poem to mark the episode: 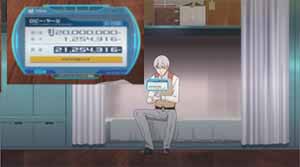